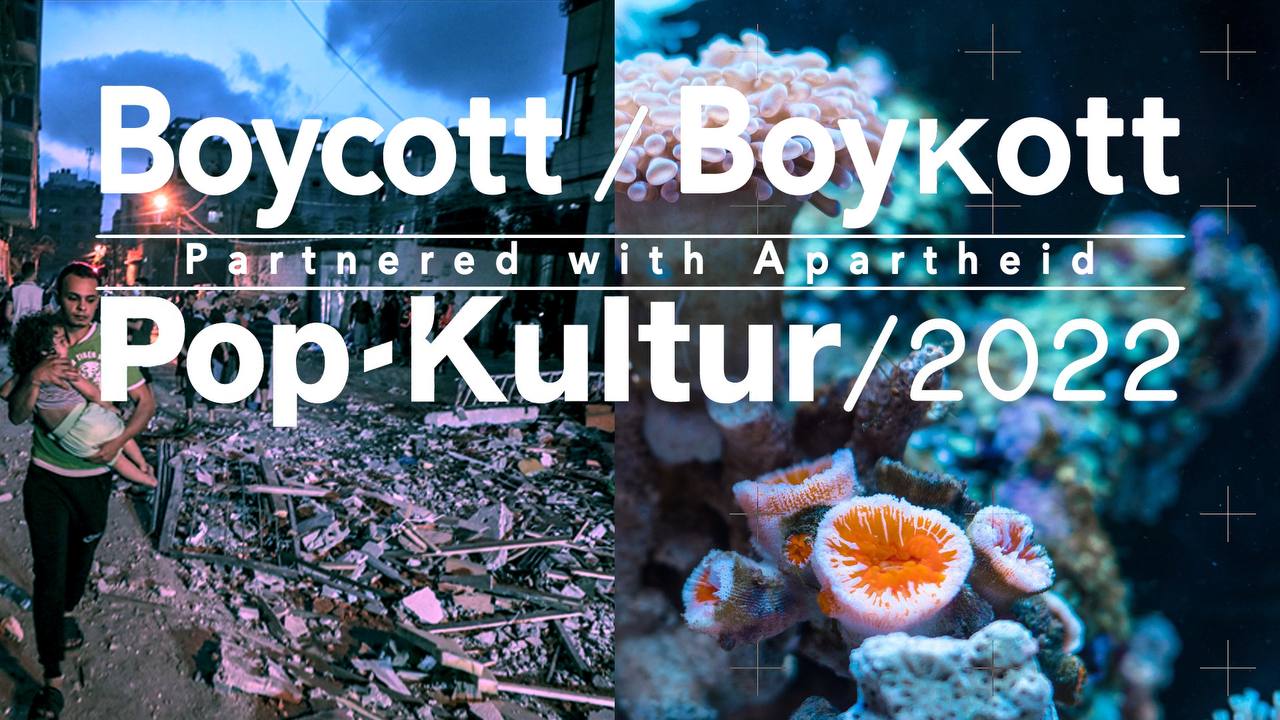 After not partnering with the embassy of apartheid Israel since 2019, and despite the withdrawal of more than a dozen artists in previous years, Pop-Kultur Festival is again partnered with apartheid.

We urge all participants to withdraw

In the last few days I have learned that since 2017 many artists from diverse backgrounds have withdrawn from Pop Kultur Berlin festival in protest at its partnership with the embassy of Israel.

In opposition to all forms of racism, bigotry and discrimination – including antisemitism, Islamophobia, anti-Blackness and anti-LGBTQ+ hatred – I have made the decision to join them.

Palestinian artists and activists, many Jewish organisations around the world, Israeli artists and Berlin-based queer activists have all urged Pop Kultur participants to cancel their appearances.

By continuing its partnership with Israel, Pop Kultur knowingly whitewashes these crimes. The festival’s stance is an effective show of support for racism, colonial brutality and murder, despite its savvy marketing language touting inclusion, diversity and tolerance.

The fact that Pop Kultur had concealed this partnership as recently as three weeks ago is a source of profound frustration for myself and I am sure many other artists. Since covid, artists already struggling to stay afloat can scarcely afford to cancel performances at short notice.

Some may cite the Bundestag’s non-binding parliamentary resolution that condemned calls from Palestinian civil society for Israel to be held accountable according to international law. I would ask them to consider that 240 Jewish and Israeli scholars, including world authorities on antisemitism and the history of the Holocaust, have opposed this resolution. They argued that such boycott calls are “a legitimate and non-violent tool of resistance”.

Also responding to the resolution, and the worrying atmosphere of political testing, censorship and repression in Germany, the directors of many leading German cultural institutions, including the Goethe Institut, stated that they “rely on a public sphere that welcomes controversial debates in accordance with the norms of the German constitution”. They added that they are “committed to paying particular attention to marginalised and disregarded voices”. They concluded that they “stand in defence of a world-open society that will struggle for the equality of all people through the rule of law and public discourse, allowing for dissent and multilayered solidarities”.

I hope that my decision in support of freedom, justice and equality for all, including Palestinians, can be understood in this context.

Recently I was invited to participate in a performance at the Pop Kultur festival in Berlin, Germany. After gaining some clarity around Pop Kultur’s stance regarding the people of Palestine, I have decided to withdraw from playing the festival.

Pop Kultur has been receiving, and continues to receive, grants from the Israeli regime. They alternately are opaque and unapologetic about this relationship depending on their current PR strategy and, in the case of this year’s edition, left off the Israeli state insignia from their website until just days before the festival— compromising the ethics and livelihoods of many artists. This is tantamount to entrapment.

In 2018, in response to a number of protests and artists pulling from the festival, Pop Kultur convened a panel discussion that was nominally meant to address the partnership with the Israeli government. However at this event, not a single Palestinian voice was invited to participate.

Palestinian members of the audience who raised objection to this were either shouted down, accosted by security guards, or condescended to by the panel speakers, accused of “politicizing” the festival.

Onstage that night was the (still current) chairman of the cultural committee who puts on the festival, Klaus Lederer, who flatly told the audience that political critique of Israel is “structurally antisemitic.” In addition to his behavior in 2018, Lederer was a featured speaker at a 2009 demonstration openly calling for the bombing of Gaza.

This goes beyond art/culture washing. Lederer is an elected official who not only ideologically aligns Pop Kultur festival with an apartheid state, but demonstrates, in his capacity as a public servant, a broader commitment to the ongoing oppression of the Palestinian population.

The issue of Palestine and Israel is not complicated— the former is a dispossessed people living in an open air prison, the latter is a colonial ethnostate given moral carte blanche by the world’s leaders. For this reason I unambiguously condemn Pop Kultur festival and any individual or institution that does business with the Israeli regime as long as the Palestinian people are not free.

For those that want to know why myself and many other artists have withdrawn from Pop Kultur Berlin. Free Palestine. Every. Fucking. Day. Until it is done.

Background, facts and our official statement on the boycott campaign against Pop-Kultur 2022

Pop-Kultur is funded by the Senate Department for Culture and Europe of the State of Berlin, the European Fund for Regional Development (ERDF), and the Federal Government Commissioner for Culture and the Media. Individual artists can receive support from the national cultural institute or embassy of their respective country for travel and the realisation of their projects – this is a common practice within international cultural exchange. We work with all countries officially recognised by the Federal Republic of Germany. Partners and sponsors have no influence over the programming of the festival. The support of cultural institutions of individual countries depends on the artistic decisions made in the process of programming the festival.

As it was in 2017, 2018 and 2019, Pop-Kultur has once again been declared a boycott target of the international BDS network (»Boycott, Divestment and Sanctions«) in 2022. The goal of this campaign is the economic, cultural, and political isolation of Israel. Various artists have received messages asking them to cancel their already confirmed performances and boycott the festival.

The Commissioned Work BĘÃTFÓØT feat. Kunty Klub receives a project grant from the Cultural Department of the Embassy of Israel. Currently, the Embassy of Israel is one of three institutions providing artist and travel support. The Canada Council for the Arts supports the Canadian act Cartel Madras with a travel grant (currently still processing, the artists applied themselves), also Wallonie-Bruxelles Musiques (WBM) supports Aksak Maboul with a travel grant (Due to health reasons – one of the band members is suffering from severe covid after-effects – the concert is moved to 2023.). The corresponding logos for these grants were uploaded to our website after; either we received confirmation of the support from the institutions mentioned, or we knew that we could expect a positive decision in the case of Canada.

In our offers to artists, we point out that Pop-Kultur can receive support from cultural institutions within the framework of international cultural exchange. These offers have already been sent out since December 2021. These offers are presented to all artists before the contract is signed. In the communication with the artists, we also reference previous BDS campaigns in connection with the festival.

Pop-Kultur’s position is the same as in 2017, 2018 and 2019. If people do not want to perform at the festival because we receive an accommodation, travel or project grant from the Cultural Department of the Israeli embassy in Berlin, we regret that decision, but we accept it. The refusal to perform, the boycott, is not our decision. We are always open to constructive dialogue, because it is important to us to seek out meaningful exchange. We continue to believe that discourse and dialogue are the only way to deal with conflict.

Pop Kultur Berlin claims apartheid Israel’s logo was “uploaded to our website after … we received confirmation of the support”.

Do festival organisers really expect participating artists to believe that after a five-year partnership with apartheid Israel, they only agreed to resume it a matter of days before this year’s festival?

The contempt for the artists it has booked would be shocking, if it was not so typical of the festival by now.

Thanks for bringing this to my attention clearly and directly. I have cancelled my performance at Pop Kultur Berlin this Friday.

It has just recently been brought to my attention that Pop Kultur Fest has financial ties to the state of Israel. I am horrified to learn that the festival has resumed this partnership, despite years of calls from artists, activists and the people of Palestine to divest from it. I was completely unaware of this situation until I was on my flight to begin this tour. At this juncture, canceling my performance would leave me in a financial debt I cannot handle so it is with a heavy heart I will take the stage to perform tonight.

I want to make it clear that I stand with the activists, artists and people of Palestine. I urge Pop Kultur Fest to amplify the voices of the activists in your own community and join me in condemning the human rights violations and systemic oppression being carried out by the state of Israel against the Palestinians.

With a heavy heart,
Xenia

At least four artists withdrew from the festival, joining fifteen others since 2017.

These artists responded at short notice to private and public appeals from human rights defenders asking them to consider cancelling their shows in solidarity with Palestinians.

They join at least fifteen artists since 2017 to distance themselves from the festival’s intentional whitewashing of its partner Israel’s apartheid regime and massacres in besieged Gaza.

In a futile attempt to prevent such principled actions of solidarity from festival artists, Pop Kultur Berlin organisers irrefutably concealed the resumption of this partnership until just days ago.

We commend these artists for their principle and courage in heeding the call of the oppressed, despite the inevitable financial losses incurred in cancelling their plans at the last moment.

Evidently shaken by the numerous, direct expressions of solidarity with Palestinian rights, some German politicians have fallen back onto familiar ground of entrenched anti-Palestinian racism and shameless, hypocritical complicity in Israel’s crime against humanity of apartheid.

Klaus Lederer – Deputy Mayor of Berlin, its cultural senator and chair of Musicboard Berlin that organises Pop Kultur – described as “disgusting” the campaign and artists boycotting the festival while urging their peers to do the same. He pledged his “determined resistance”.

Lederer, it should be noted, has been issuing these despicable threats for at least five years with little impact other than trashing the reputation of his own supposedly progressive music festival. He and Claudia Roth – Germany’s culture minister who condemned the campaign and the artists who heeded its appeals while speaking at the festival’s opening night – should instead focus on their moral obligation to end links of complicity with Israel’s apartheid regime.

We reiterate our call to boycott Pop Kultur Berlin festival, including its 2023 edition and all future editions that include partnership with apartheid Israel.

Any German cultural institution partnering with and trying to artwash apartheid, engaging in anti-Palestinian censorship or otherwise adopting repressive measures against our nonviolent struggle for freedom, justice and equality, may face similar measures as Pop Kultur Berlin.